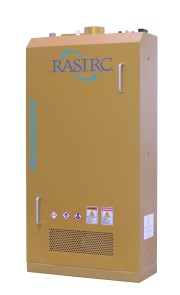 San Diego, CA, June 17, 2015 (Newswire.com) - ​​​​Today, RASIRC publicly announced the Peroxidizer™, a high concentration hydrogen peroxide (H2O2) vaporizer designed specifically for the needs of next generation semiconductor processes, These include Atomic Layer Deposition (ALD), annealing, cleaning and etching. The Peroxidizer is the first commercial vaporizer capable of delivering concentrations greater than 5% H2O2 gas by volume from 30% H2O2 liquid source. Delivered droplet-free and at temperatures as low as 80°C, H2O2 is a superior oxidant for use with new semiconductor materials and processes that are sensitive to high temperature and defects. The Peroxidizer delivers 10 times higher concentration than the previous technology it replaces.

The Peroxidizer eliminates problems associated with other oxidants used in semiconductor fabrication processes. Ozone and oxygen plasma are too aggressive, penetrating below the interface layer and damaging both surface structures and the bottom electrode. Both ozone and water have greater steric hindrance than H2O2, resulting in a less dense interface layer. In addition, plasma cannot deeply penetrate high aspect structures, resulting in non-uniform coatings. Water is less reactive than H2O2 gas. Water requires higher process temperatures, which makes it a poor choice with new materials, new precursors, and lower thermal budgets.

“The Internet of Things requires low power and high performance semiconductor devices, which will only be enabled through new materials and 3D architectures,” explains Jeffrey Spiegelman, RASIRC Founder and President. “However, these new devices can only be processed at lower temperatures and their complicated physical structures make deposition and cleaning a new challenge for the semiconductor industry. The Peroxidizer is the first tool to enable stable and particle-free delivery of high concentration hydrogen peroxide gas, enabling lower process temperatures, greater use of new materials and high process throughput. It is really exciting to bring an old molecule to market in a completely new state.”

The Peroxidizer is the latest innovation in high purity gas generating products from RASIRC. Its Stabilized Gas Delivery system was the first in the industry to deliver high purity, stable H2O2 gas by overcoming Raoult’s Law, which causes preferential selection of water molecules from H2O2 solution. The SGD used pre-humidification to ensure that the liquid H2O2 source remained at constant concentration while delivering H2O2 gas to process at a 50:1 water to H2O2 molar ratio. The Peroxidizer further reduces that ratio to 4:1, allowing as much as 5% H2O2 gas by volume to flow to process. The Peroxidizer eliminates the pre-humidification step by concentrating the liquid source until the molar ratio in the headspace reaches 4:1.

H2O2 gas achieves higher density nucleation than other oxidants. H2O2 has less steric hindrance than water or ozone because it decomposes into hydroxyls on surfaces. The resulting dense layer of hydroxyls creates an ideal surface for ALD.

High reactivity enables process engineers to use precursors that normally would not react with water or ozone. This reactivity also results in active removal of carbon.

The Peroxidizer delivers at a 4:1 water:H2O2 molar ratio, the most concentrated H2O2 gas delivery available and a 10x improvement over the previous generation from a 30% liquid source. Previous ALD studies frequently assumed that H2O2 was delivered at 4:1 ratio when in fact H2O2 delivery was much lower at 100:1.  For the first time, ALD processes can use H2O2 with minimal interference from water vapor.

“The ability to replace water vapor and steam with hydrogen peroxide gas reduces time and operating temperature.  This will enable next generation gap fill technology, a critical milestone for success with 3D structures,” said Spiegelman.

Hydrogen peroxide gas enables dry in situ cleaning and surface preparation, eliminating the need for liquid baths and the contamination risk associated with transfers from bath to chamber. Less chemical is required for this dry process and no drying step is needed.

Hydrogen peroxide gas removes carbon-based contaminants on wafer surfaces while avoiding damage to device structures that can be caused by ozone or liquids. Organic hydrocarbons are oxidized, enabling their removal.

“The Peroxidizer gives fabs a great alternative to their current cleaning technologies,” said Spiegelman. “The ability to deliver hydrogen peroxide as a gas instead of a liquid speeds the move away from wet processing to more effective dry cleaning, which will be needed to support Moore’s Law.”

With the Peroxidizer, process engineers can precisely control their processes. The Peroxidizer delivers hydrogen peroxide gas in concentrations from 12,500 to greater than 50,000 parts per million depending on flow rate. This correlates to 1.25 to 5+% gas by volume delivery to process. The Peroxidizer supports carrier gas flows from 5 to 20 SLM in vacuum to atmospheric pressure. The Peroxidizer is available immediately.  For details and to order, contact RASIRC.