Contemporary Music SuperStudy 2 finds major genre differences between the most popular contemporary songs with each group, but consensus on the least-popular title 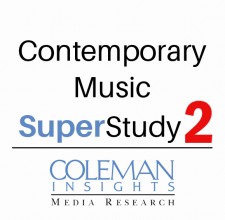 The study conducted by the media research firm examines the appetite for contemporary music among 12- to 54-year-olds across the United States and Canada. The firm’s FACT360SM Strategic Music Test platform is utilized to measure the appeal of the most-consumed songs of 2019 based on radio airplay, streaming and sales data, as reported by MRC Data/BDSradio.

Among consumers who have a positive opinion of President Trump, Country represents 50% of their Top 100 titles. The next-highest testing genre is Pop at 26%, the only other genre achieving a double-digit share of the Top 100 contemporary songs. This is followed by a tie between Alternative/Rock and Hip Hop/R&B (9%), Dance/Electronic (4%), Other (2%) and Latin (0%).

Meanwhile, Pop titles perform best among consumers with a positive opinion of former Vice President Joe Biden. These titles comprise 38% of their Top 100, followed closely by Hip Hop/R&B at 33%. Performance of other genres includes a tie between Alternative/Rock and Country (10%), Dance/Electronic (6%), Latin (2%) and Other (1%).

Notably, the 10% of Country titles in the Top 100 of Biden fans is similar to the 9% of R&B/Hip Hop in the Top 100 among those who view Trump positively.

The best-testing song overall among supporters of President Trump is “Believer” by Imagine Dragons, while “Shape of You” by Ed Sheeran is the top pick among Biden supporters. Those two songs and three others – “Someone You Loved” by Lewis Capaldi, “The Middle” by Zedd & Maren Morris and “Can’t Stop The Feeling” by Justin Timberlake – are among the top 10 songs of both groups.

In a rare moment of bipartisanship, Trump and Biden supporters agree on their least-favorite of 2019’s most-consumed songs – “Baby Shark” by Pinkfong.

”While we are not in the business of giving political advice, there are clear takeaways for the Trump and Biden campaigns,” said Coleman Insights president Warren Kurtzman. “When considering music to use in stage entrances at rallies (if and when they return) and advertising efforts, each group of supporters has distinct genre preferences. And it’s probably best for both campaigns to pass on ’Baby Shark.’”