Does This Novel Predict the Future?

"Demons, Well-Seasoned: Book III in The Secret Spice Café", written by Patricia V. Davis and published by Tantor Media, is a novel about racial unrest and a pandemic that takes place in 2020. But it was written in 2018 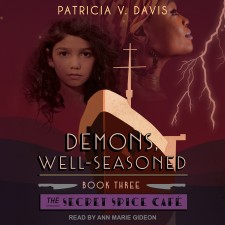 SAN FRANCISCO, July 10, 2020 (Newswire.com) - "It was a pandemic that collected souls, and the more it gathered, the stronger it became." When Patricia V. Davis penned those words in 2018 for her novel Demons, Well-Seasoned, the final book in her Secret Spice Café Trilogy, she had no idea they would become prophetic. Nor did she know, when she spun her story around a Haitian Voodoo priestess who'd lived through the Civil Rights Movement of the 1960s, that protests against racial injustice would once again roar to life after the killing of George Floyd at the hands of police in 2020, the very year her story takes place. And, just as in Book I and II in the series, Davis sets her tale on the historic RMS Queen Mary.

In Demons, Well-Seasoned, the real-life ocean liner, which serves as a floating hotel and museum, is deserted by visitors and crew alike, something that has never happened in the more than 50 years the ship has been docked in Long Beach, California. But in April of 2020, that's precisely what occurred: the operators of the ship shut her down, due to the COVID-19 virus.

The author says she's not psychic, that it's her characters who have the supernatural gifts. Yet, it's the author who wrote: "She felt certain, somehow, that in the perpetual struggle of dark against light, the dark was winning. In the news, online, she heard nothing but mercilessness, and it filled her with grave sadness. Evil was reveling in its gluttony, consuming all that was worthy and laudable, to burgeon like a plague."

The publishing industry has labeled the trilogy "women's supernatural fiction." But readers of the series, of all sexes and stripes, have found it to be more than the boundaries of its genre.

California Bookwatch says, "To call Demons, Well-Seasoned a work of mystery, romance, historical fiction, or intrigue would be to do it an injustice."

Kate Farrell, former president of the Women's National Book Association San Francisco and author of Story Power: Secrets to Creating, Crafting, and Telling Memorable Stories, writes, "Davis is prescient in placing this intense drama in our time, the year 2020, skillfully building a narrative of rising tension, danger, and confrontation. An allegory, perhaps, for the political crises in America that need resolution?"

The series, released in its audiobook versions by Tantor Media in July 2020, has also garnered the praise of noteworthy others, including Huffington Post, Becky Spratford of RA for All, and none other than magician David Copperfield.

The two other novels in The Secret Spice Café Trilogy are Cooking for Ghosts and Spells and Oregano. www.TheSecretSpice.com