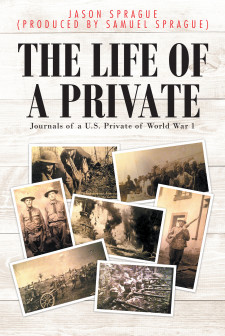 NEW YORK, January 20, 2022 (Newswire.com) - Fulton Books author Jason Sprague, a veteran of the first world war who was stationed in France, a man who lived a meaningful life before he left the world in 1938, and Samuel Sprague, a professional martial artist with a six-degree black belt, a great-grandson to Jason Sprague, have completed the book "The Life of a Private": a potent account that provides information on the life of Jason Sprague as he fights for his country during WWI. As the war comes to an end, Jason took the opportunity to document the events that are now part of world history. Accompanied by images taken by Jason himself, his narrative gives more life to the memories of the yesteryears.

"A firsthand account written in the final year of World War I. Jason Sprague recounts his experience as a private in the United States military. Sprague presents his adjustment from a serene life in the states to the battle-ravaged fields and confusion of Europe during 'the war to end all wars' from the explosion of the Spanish flu, the signing of the armistice, and the aftermath of the Argonne Forest offensive. Including images he took himself or collected along the way, he details his journey from his landing in France as he joins his company on the march towards Germany. The detailed stories provided offer a unique perspective to even those who are experts of this historical conflict."

Published by Fulton Books, Jason Sprague's book is produced by his great-grandson Samuel. These war anecdotes depict the reality of that time and present a different perspective, a raw and compelling one.

Readers who wish to experience this inspiring work can purchase "The Life of a Private" at bookstores everywhere, or online at the Apple iTunes store, Amazon, Google Play or Barnes & Noble.

Please direct all media inquiries to Author Support via email at support@fultonbooks.com or via telephone at 877-210-0816.

Tags: Fulton Books, Jason Sprague, The Life of a Private

Fulton Books is the most affordable solution for getting your book professionally published. We offer a unique partnership with authors wherein we assist you with publishing your book.

Eva-Maria Frank's New Book 'A Miracle for Evi' is a Delightful Piece About Prayers, Faith, and Miracles
Fulton Books - May 19, 2022

Nanette Gardner's New Book 'Thirteen Percent' is an Insightful Read Discussing the Misbehaviors of Some Blacks That Harm the Image of African Americans as a Whole
Fulton Books - May 19, 2022

Lawrence Ripp's New Book 'The Baron of Bubble!' is a Lovely Flight Into a Kingdom Filled With Beauty, Fun, and Bubbles.
Fulton Books - May 19, 2022