Meet a Scientologist Bets the Farm on Peter Vajda 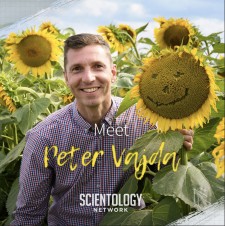 LOS ANGELES, January 13, 2020 (Newswire.com) - ​​Scientology Network’s MEET A SCIENTOLOGIST, the weekly series spotlighting the everyday lives of Scientologists from around the world and all walks of life, announces an episode featuring the award-winning agricultural engineer Peter Vajda, premiering Jan. 14, 2020.

Heavy chemical pesticides and synthetic fertilizers are leaving a devastating wake of barren farmlands. But agricultural engineer Peter Vajda has committed his life’s work to rehabilitating the natural process. And his award-winning, organically based technology is gaining international recognition as a solution that may well restore the planet’s plant life.

“Agriculture is in my veins,” states Hungary native Peter Vajda. His fond memories of apple picking in his grandfather’s orchard contributed to Peter’s current profession as an agricultural engineer. But it wasn’t until he graduated from college that Peter realized in 60 years there may very well be no apples—or any kind of life, for that matter. The heavy use of chemicals and pesticides is leading to the rapid desertification of the world’s best farmlands, creating an imminent threat of destruction for all life-forms on Earth. Then he learned of a game-changer—what would later be called “Phylazonit,” a technology to reintroduce beneficial bacteria into the soil. Peter began working for a company at the forefront of soil rejuvenation and eventually became the chief executive officer. With Peter at the helm, driving the research and development, and Phylazonit’s ability to transform dead ground into new growth, the product’s popularity is spreading around the world, along with a hope that our farmlands and our food production can be brought back from the brink of extinction.

The Scientology Network debuted on March 12, 2018. Since launching, the Scientology Network has been viewed in 240 countries and territories worldwide in 17 languages. Satisfying the curiosity of people about Scientology, the network takes viewers across six continents, spotlighting the everyday lives of Scientologists, showing the Church as a global organization, and presenting its social betterment programs that have touched the lives of millions worldwide. The network also showcases documentaries by independent filmmakers who represent a cross-section of cultures and faiths but share a common purpose of uplifting communities.

Broadcast from Scientology Media Productions, the Church’s global media center in Los Angeles, the Scientology Network can be streamed at Scientology.tv and is available through satellite television, mobile apps and via the Roku, Amazon Fire and Apple TV platforms.