Music and Books Come Together in New Audacious Project

Here in the Shadows: Music Inspired by The Whispers of the Fallen Book Series promises to start a new trend by bringing books and music together in a way like never before. 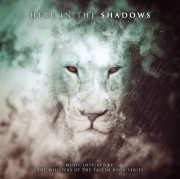 Dave Eggar, Chuck Palmer, Dina Fanai, and J.D. Netto joined their creative abilities and have created a sound so unique and entrancing, readers and listeners alike will be taken on an unforgettable journey.

"I am so honored to have worked with J.D. Netto on this fantastic project," says Eggar, who has performed and recorded with artists in numerous genres including Evanescence, The Who, Michael Brecker, Phillip Phillips, Josh Groban, Coldplay, and Beyonce. "In his novels, J.D. has created a world of profound mystery, intrigue, adventure and drama. It was an exciting experience to capture this world in music and to create with such a phenomenal team of top notch collaborators!”

"I’m extremely honored to be a part of this team. We, in a sense, scored J.D.’s work as one might score a film. It was very exciting," says Chuck Palmer, who co-produced Dave Eggar's Grammy-nominated release "Kingston Morning."

"I am thrilled to be a part of this breathtaking project and excited to have listeners and readers discover this dark and beautifully evocative world that J.D. has created,” expressed Fanai, whom has been the recipient of numerous grants and awards from The Songwriter's Hall of Fame and National Endowment for the Arts. She is also known for her work as a vocalist, songwriter, original composer, and as a singer with the multi-platinum selling arena rock band Trans-Siberian Orchestra.

"I am proud to have worked with such talented musicians," says Netto. "The song truly captures the essence of the books and will definitely take the reader on an inspiring journey.”

Here in the Shadows: Music Inspired by The Whispers of the Fallen Book Series is now available for purchase and streaming in all digital platforms.

The Whispers of the Fallen series has become a prominent presence in Young Adult literature, captivating thousands of readers worldwide. The sequel, THE WHISPERS OF THE FALLEN: REBELLION, was released at  BookCon 2014 in New York City. The third book, THE WHISPERS OF THE FALLEN: THE GATHERING OF SHADOWS, was released on October 30th at Books & Books in Coral Gables, which was voted by Publisher’s Weekly as Bookstore of the Year.

About Shadows and War Music

Music Inspired by The Whispers of the Fallen Book Series