ARLINGTON HEIGHTS, Ill., March 5, 2019 (Newswire.com) - The American College of Osteopathic Family Physicians (ACOFP) is pleased to announce its 2019 award winners in several categories. Nominations are solicited from members, committees, state societies, colleges of osteopathic medicine and residency programs, with the final selection made by the ACOFP Board of Governors. The awards will be presented to this year’s winners at the ACOFP 56th Annual Convention and Scientific Seminars from March 21 to 24 in Chicago, Illinois.

2019 Osteopathic Family Physician of the Year

Kevin V. de Regnier, DO, FACOFP, dist. has been named ACOFP’s 2019 Osteopathic Family Physician of the Year. Dr. de Regnier is an osteopathic family physician and President of Madison County Medical Associates in Winterset, Iowa. He served as President of ACOFP in 2015-2016, is a Distinguished Fellow, and has served as a member and chair of numerous ACOFP committees. In addition to over 30 years as a practicing physician, Dr. de Regnier volunteers his time and services to several other osteopathic associations and medical organizations and supports his community by helping with causes such as suicide prevention, hospice care, first responders support, the DARE program and more. Dr. de Regnier’s professional interests include Osteopathic Manipulative Medicine, diabetes care and education, and geriatrics.

The ACOFP Osteopathic Family Physician of the Year Award honors physicians who have made outstanding contributions to the osteopathic profession and local communities.

Jillane K. Pitcher, DO, FACOFP has been named the ACOFP 2019 Outstanding Female Leader. Dr. Pitcher is certified as an osteopathic family physician and correctional medicine physician and is a Founding Diplomat of the American Board of Holistic Medicine. In addition to her broad clinical experience in inpatient and outpatient practice, she has also served as residency faculty trainer, correctional facility medical director, and full-time teaching faculty at Rocky Vista University Osteopathic Medical School. Dr. Pitcher’s has enjoyed 30 years of service and growth in the practice and teaching of osteopathic medicine in a variety of formats that include both patient care and student and resident teaching.

The ACOFP Outstanding Female Leader Award honors female physicians who serve as clinical role models, teachers, highly accomplished professional leaders and sources of inspiration for women and men who are in medical training.

William J. Cox, DO, FACOFP has been named the ACOFP 2019 Educator of the Year. Dr. Cox is an osteopathic manipulation treatment (OMT) specialist in Kansas City, MO and has been practicing for 19 years. He graduated from Kansas City University of Medicine Bioscience College of Osteopathic Medicine in 2000. Dr. Cox has extensive lecturing experience, giving over 50 national and 25 regional presentations. He has served as a mentor for many students, as a preceptor for OMT, and as a Board Member for DOCARE,a International, NFP. Throughout his career, Dr. Cox has worked to spread the knowledge of osteopathic medicine on a global level.

The ACOFP Educator of the Year Award honors an individual who exemplifies the osteopathic family medicine profession’s highest standards of excellence in teaching and has made significant, commendable, and long-standing contributions to the academic advancement of osteopathic students, residents and the osteopathic profession.

2019 Young Osteopathic Physician of the Year

Sean P. Perrine, DO is the winner of the ACOFP Young Osteopathic Physician of the Year Award. Dr. Perrine is a family physician specializing in addiction medicine and OMT at Lancaster Health Center and Patient First Urgent Care in Pennsylvania. He received his Doctor of Osteopathic Medicine in 2013 and completed his residency in 2016 from the Philadelphia College of Osteopathic Medicine in Philadelphia, Pennsylvania. In addition to his certifications in osteopathic medicine, he is licensed with the US DEA, specializes in opioid dependency treatment and is a member of the American Heart Association. Dr. Perrine has been an active member of ACOFP since 2010, serving on several committees and as a Congress Delegate.

The ACOFP Young Osteopathic Physician of the Year Award honors physicians who have made significant contributions to family medicine between two and 10 years after entering the specialty.

Katarina Lindley, DO, FACOFP is the winner of the ACOFP 2019 Excellence in Advocacy Award. Dr. Lindley is the owner of and a family physician at Eagle Medical Center in Brock, Texas, a direct primary care practice. She has volunteered her time and expertise for numerous medical organizations, including ACOFP, as a student, resident, and physician for over 20 years. She has received numerous awards and has organized many community events including a Homeless Shelter Feeding Program, Doctor's Bag Program for Children, health care community events, and the Yellow Ribbon Suicide Prevention Program. In addition to advocating for her patients, Dr. Lindley is a strong advocate for the direct primary care business model, speaking at events about its benefits to both physicians and patients.

The ACOFP Excellence in Advocacy Award recognizes physicians who have significantly contributed their time and talents to national health care policy issues at the local, state and/or federal levels on behalf of his/her profession and patients. This award is named in honor of Marcelino J. Oliva, Jr., DO, FACOFP dist.

Steven F. Rubin, DO, FACOFP is the winner of the Lifetime Achievement Award. Dr. Rubin is a family medicine doctor in Paramus, New Jersey and is affiliated with Valley Hospital. Dr. Rubin is one of 68 doctors at Valley Hospital who specializes in family medicine. He has served as a clinical professor of family medicine, director of OMT and in other faculty positions at several Colleges of Osteopathic Medicine. He has been an ACOFP Fellow since 1992, has served on the ACOFP Board of Governors and on several ACOFP committees, in addition to serving on numerous other medical associations since 1986. Dr. Rubin has also won several awards, including 2005-2006 American Osteopathic Association Mentor of the Year.

About the American College of Osteopathic Family Physicians

Founded in 1950, the American College of Osteopathic Family Physicians (ACOFP) represents and supports a community of more than 20,000 practicing and in-training osteopathic family physicians. ACOFP’s mission is to promote excellence in osteopathic family medicine through quality education, visionary leadership and responsible advocacy. ACOFP empowers its members with education and resources that allow them to adapt to new models of care and quickly changing government policy. For more information, visit www.acofp.org. 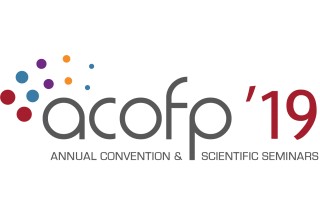 ACOFP is a community of current and future family physicians that champions osteopathic principles and supports its members by providing resources such as education, networking and advocacy, while putting patients first.