Ambassador M. Osman Siddique Announces the Release of His Memoir - Leaps of Faith

Leaps of Faith: An Immigrant's Odyssey of Struggle, Success, and Service to His Country (Foreword by President Bill Clinton) 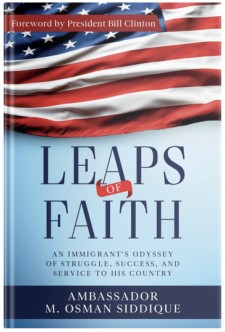 WASHINGTON, July 6, 2020 (Newswire.com) - ​​​​When he was appointed ambassador to Fiji, M. Osman Siddique imagined waving the U.S. flag with one hand while holding a piña colada in the other. How could he have known the dream job would land him in the middle of a paramilitary coup? It’s just one more enthralling chapter in the remarkable life of a Bangladeshi immigrant who came to the United States to find the American dream. And find it he did, first as a hugely successful entrepreneur and then as America’s first serving Muslim ambassador. Through it all, he gained an appreciation for the U.S., unique to those who come to the country from elsewhere, an appreciation for the freedoms established by the Founding Fathers and guaranteed by the Constitution —“The miracle of America.”

Leaps of Faith: An Immigrant’s Odyssey of Struggle, Success, and Service to his Country is the delightful memoir of a man humbled by the possibilities of his new land and by the opportunities he discovered—in business, in love, in family, and, ultimately, in government service. Ambassador Siddique reflects on his past and looks to the future—his future and the future of America. In the turbulent seas of our times, can America continue to be the beacon of hope for the world that it was to him?

Read more about the book:  https://www.osmansiddique.com/

“What shines forth the brightest in this memoir is Osman’s unwavering faith -in himself, in his community, and, most assuredly, in his country.” - President Bill Clinton

“Ambassador Siddique has written an extraordinary book about his extraordinary life. America is much better for his having immigrated here and served his country so ably.” - David M. Rubenstein, Co-Founder and Co-Executive Chairman, Carlyle Group

“Osman Siddique’s memoir is a lively and well-written account of his journey to the American Dream; a journey that took him from his childhood in Bangladesh to a successful career as an entrepreneur in the United States, and then representing the country as U.S. ambassador to Fiji. It’s quite a ride and a fascinating read.” - Peter Bergen, Vice President of New America, author, journalist, and national commentator on security issues. His latest book is Trump and his Generals.

Ambassador M. Osman Siddique served as an American ambassador to two presidents, preceded by a successful 25-year career in business. In 1999, President Clinton appointed Siddique ambassador to Fiji, Tonga, Tuvalu, and Nauru. Following the 2000 Fijian paramilitary coup, Ambassador Siddique played a critical role in the restoration of democracy and the rehabilitation of the country.