Donald A. Barr's New Book 'Don Quixote and Me' Shares a Young Boy's Adventure in Meeting the Noble Don Quixote 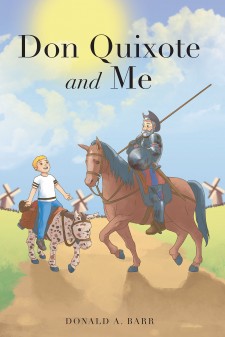 PALO ALTO, Calif., October 16, 2020 (Newswire.com) - Donald A. Barr, a Professor of Pediatrics at Stanford University, has completed his most recent book “Don Quixote and Me”:  a gripping and potent fiction about Sandy, a young boy who finds himself taken into the time of Don Quixote’s adventures where he gets to accompany the noble knight errant in his many thrilling escapades.

Donald writes, “As a 12-year old boy, Sandy Preston loves reading books about the great knights of the Middle Ages. One day in the public library, a kindly librarian shows him a book about the famous knight, Don Quixote, written by Miguel Cervantes more than 400 years ago. While reading this book, Sandy is sent through a time warp to 17th century Spain, where he meets the very same Don Quixote who is in the book. Sandy gets to accompany Quixote on a series of adventures. Quixote explains to Sandy that it is the duty of a true knight errant to hold to his own beliefs and values, no matter what other people think or say. As they go through many of the adventures originally described by Cervantes, Sandy begins to see Quixote’s nobility. Sandy adopts the principles of knight errantry as his own. Quixote shares with his friends the story of how ‘Sir Sandy’ has now come to represent a new generation of knight errantry. Thus ennobled, Sandy finds the time warp has re-opened, allowing him to get home just before his Mom returns from work. Over dinner, Sandy explains to his Mom what it is about knights that is so important to believe in. It’s about setting a moral standard to live by, even if others can’t see its value. Sandy’s Mom offers Sandy the opportunity to demonstrate this new standard through his schoolwork, and through helping those in need.”

Published by Fulton Books, Donald A. Barr’s book is an interesting retelling of a famous epic from the perspective of a young adventurer who has gotten to learn nobility and knight duties firsthand from the great Don Quixote himself.

Retold in a way that makes it available for young readers, the story of Don Quixote will stir everyone’s hearts.

Readers who wish to experience this exciting work can purchase “Don Quixote and Me” at bookstores everywhere, or online at the Apple iTunes store, Amazon, Google Play or Barnes and Noble.

Please direct all media inquiries to Gregory Reeves via email at gregory@fultonbooks.com or via telephone at 877-210-0816.

Tags: "Don Quixote and Me", Donald A. Barr', Fulton Books

Fulton Books is the most affordable solution for getting your book professionally published. We offer a unique partnership with authors wherein we assist you with publishing your book.

Jessica Scott's New Book 'Why Won't Anna Say Hi?' Is An Insightful Tale About A Young Girl Who Befriends Her Classmate With Autism
Fulton Books - Oct 30, 2020