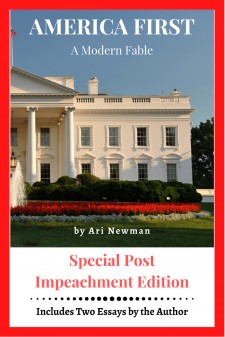 JERUSALEM, February 20, 2020 (Newswire.com) - ​​Veteran Hollywood producer and Israeli author Ari Newman has written a special Post Impeachment Edition of his prescient book AMERICA FIRST: A Modern Fable: A Story About An American Civil War, which was first published weeks into the Trump Presidency.

This Special Post Impeachment Edition includes two essays by Newman, one titled A Treatise on the Victims of Political Narcissism and the other, The Trump Responsa. Neither essay is political but discusses how governments such as Israel and North Korea have taken advantage of Trump's troubled character and persona; why his victims (mainly his supporters) are blind to his character flaws; what will happen to them when his "mask" begins to come off, and how people such as Trump "hoover" once they are "unmasked".

To explain these phenomena Newman quotes a YouTube comment where a victim describes his/her eventual realization that he/she is in a relationship with a narcissist. The victim writes, "Oh my gosh… 'the person that I loved did not exist!' So true. I don't miss him, I miss who I thought he was."

Using a proprietary algorithm he created, Newman predicts that the United States of America will break apart as a republic. Newman mainly uses the algorithm for media business forecasts, which he first applied over a decade ago to predict the collapse of the DVD market that followed shortly thereafter. In 2016 he first applied the algorithm in a non-business environment to forecast Trump's electoral victory.

Explaining his prediction Newman writes, "I do not believe Trump will serve one day in jail but I could see a Napoleon 'exile' situation (something I would advocate for), or him fleeing the country. If I am wrong it means that he has become a dictator or a king. Therefore, for the rest of his life, Trump will either be a Ruler or a Prisoner. He cannot be the King of the United States because if he were to be king, the Republic would break apart. You can't have one without the other."

Commenting on the original intent and meaning of the book in 2017 Newman said, "This book is not political in the sense of promoting a specific politician, party, or policy. Rather, its purpose is to raise issues concerning the fragility of American democracy. Other than Oman, San Marino, and Morocco, the U.S. government is the oldest continuous functioning government system in the world today. Perhaps a re-write of the Constitution is needed and that periodic Constitutional Conventions should be the nucleus of this continued endeavor."

AMERICA FIRST: A Modern Fable is an action-packed story of terrorism, treason, a Red State/Blue State civil war, and an investigation that leads into the highest political offices of the land.

Newman's films include the National Lampoon's Van Wilder and the Art of War franchises and the Sundance hit Next Stop Wonderland. The book is published by the societal periodical MrsVanderbilt.com.