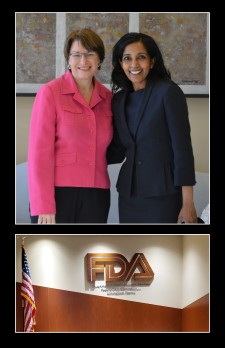 MINNEAPOLIS, January 14, 2020 (Newswire.com) - ​​​​Dr. Nalini Rajamannan — a specialist for patients with valvular heart disease in Most Sacred Heart of Jesus Cardiology, Sheboygan, WI — confirms FDA statements to Senator Amy Klobuchar Minneapolis Senate Office on January 13, 2020. Senator Klobuchar has followed the investigation since 2014, during the Senate Judiciary Committee Investigation led by Senator Charles Grassley (IA). Dr. Rajamannan met with Program Division Director for Bioresearch Monitoring West, at the FDA Branch in Minneapolis MN to review medical outcomes of the use of the non-exempt heart device, (Please See Linked Affidavit signed by the FDA, the Doctor and patients.) The surgical protocol for these devices began in 2006, as reported by the Project on Government Oversight. In 2007, the device manufacturer confirmed the “exempt status” in a two-line email to the hospital. The saga related to the heart device is outlined by Dr. Elisabeth Rosenthal's new book “An American Sickness” highlights the issues related to exempt medical devices in the chapter, “How to get into a Patient’s Heart? Follow the Money.” The chapter outlines the events summarized by eye-witness Dr. Nalini M. Rajamannan in the series “​The Myxo Files a XXIV: A Tale of Three Rings” as published by Kindle Publishing on Amazon.com.

Dr. Rajamannan received and submitted to Senator Klobuchar the FDA Congressional to the Senate Finance Committee’s Chairman Grassley(IA) after several years of investigations, classifying the device as not exempt from reporting the device to the FDA, and that the device manufacturer needs to submit a new approval application. (See Linked PDF of the FDA Congressional Letter.) The Chicago FDA office released an FDA Freedom of Information in anticipation of the meeting in Minneapolis, MN. The Inspection report confirms the University decision to stop the study after three months. The information will help the 667+ patients to finally may get answers about whether medical devices placed in their bodies are tested and safe, as the Food and Drug Administration begins to allow access to volumes of previously shielded data from consumers as written to then-Senator Richard Lugar (IN). and Congressman Glenn Grothman (WI). The Senate Finance committee is involved in these investigations on behalf of Medicare and Medicaid because government dollars fund the use of medical devices in patients’ health. More importantly, the new changes to the FDA reporting laws as outlined by Kaiser Health News will help patients know more about medical devices implanted into their bodies.

Dr. Nalini Rajamannan is a heart valve expert in the field of cardiovascular medicine. She earned her undergraduate science pre-professional degree from the University of Notre Dame, her Medical Doctorate from Mayo Medical School and her post-graduate training in Internal Medicine and Cardiology at the Mayo Clinic and Research Fellowship on the NIH training Grant. She also worked at the Mayo Clinic as a staff consultant in Internal Medicine and an Associate Professor of Medicine at Northwestern University and the Lakeside and Westside VA. Currently, she practices consultative valvular medicine and Osteocardiology at Most Sacred Heart of Jesus Cardiology and Valvular Institute, WI.

Source: Most Sacred Heart of Jesus Cardiology and Valvular Institute

Dr. Rajamannan Reports to Northwestern University, Chicago IL VP: COVID-19 Non-Compliance in Clinical Trials
COVID-19 - The letter to the VP for Research
Most Sacred Heart of Jesus Cardiology - May 22, 2020

Dr. Rajamannan Holds Meeting With CDRH Ombudsman Abiy Desta to Review New Evidence of Concealment and Injuries Related to the Testing of FDA Investigational Heart Device
"Our responsibility is to do no harm and to protect from harm," says Dr. Rajamannan.
Most Sacred Heart of Jesus Cardiology - Mar 9, 2020