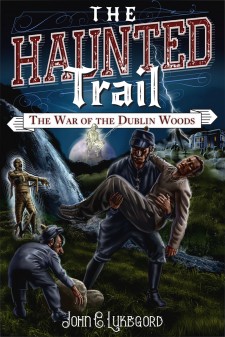 GLOUCESTER, Mass., June 30, 2020 (Newswire.com) - ​It’s All Hallow’s Eve in the Dublin Woods, and an ancient evil has command over ghosts, ghouls, and lunatics as it relentlessly searches for a cursed object of great power.

The curse of Dublin Woods has lasted through the millennia, ever since an invading Egyptian army swept through Ireland, scouring the region for a magical artifact. This blessed item, an Irish four-leaf clover, has the power to heal—or to destroy—when reunited with its twin. The matching relic is embedded in the heart of a grotesque mummy. If the rotting creature gets its hands on the other clover, the entire world will burn—like the Dublin Woods did long ago.

In The Haunted Trail: The War of the Dublin Woods by John Lukegord (J&J Writing Corp, available now), Mick Patrican is determined to prevent this. Mick never intended to get involved in a supernatural war, but when he finds himself lying in a cave, injured and fighting for his life, he will have to take a stand against an evil that has caused death and destruction for thousands of years. Guided by stalwart spirits, Mick must find the clover and stop the curse once and for all.

In 1892, Patrican finds himself lying in a cave with broken legs, punctured lungs, and a massive bullet wound. He is on the run from deranged killer Scott McArthur and his band of murderous madmen. The gang has already killed Mick’s two brothers—and they’ll stop at nothing to finish the job.

The homicidal maniacs have been worked into a frenzy by the curse of the Dublin Woods. Now, on Halloween night, this murderous mummy is at the height of his power. Determined to succeed in his quest to find an important mystical artifact hidden somewhere deep within the forest, he has taken control of McArthur and the others to help him fulfill his sinister mission.

Aided by friendly spirits, Mick must outrun and outwit both the mummy and the murderers in order to find the artifact first, venturing into the dark heart of the woods to confront the curse itself. Will he make it out alive—or is he destined to share his family’s fate?

This book company was founded on June 13, 2016. I have published four fiction/horror books. All book titles are available on Amazon.

John C Lukegord's Campfire Tale 'The Haunted Trail: A Tale of Two Four-Leaf Clovers (Volume 3)' Now Available on Amazon
An intense journey that goes back two-thousand years into the violent past of the haunted trail sets up this action-packed storyline. News provided by J&J Writing Corp.
J&J Writing Corp. - Jun 30, 2020

Chilling Novella Goes Inside the Mind of a Sociopath and the Town He's Targeted for Revenge
J&J Writing Corp. - Oct 10, 2017