The Netflix show host travels to Berlin in partnership with Lingoda to put her new German language skills to the test. 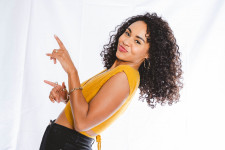 MIAMI, June 23, 2022 (Newswire.com) - Lingoda, a leading online language school, is partnering with polyglot and language learning enthusiast Jo Franco, who is challenging herself to learn German in two months during a Lingoda Language Sprint™. This intensive language learning course, designed by Lingoda, challenges students to take daily language classes in a short period of time for a chance at earning cashback. During the program, students are encouraged to speak regularly, following a set curriculum, to give them the confidence after two months to speak their new language comfortably.

Now, the host of the Netflix show "The World's Most Amazing Vacation Rentals" has taken on the challenge to learn German with Lingoda's 24/7 live classes. Franco will travel to Berlin from June 21-26 to try out her new language skills and test whether Lingoda's classes have given her the tools to chat confidently with locals in the German capital.

The partnership between Lingoda and Franco will last from June 20 until July 5. Within this time frame, she will take group and individual classes to crush her German language learning goals.

"The minute I heard about Lingoda's language learning challenge I said, 'ich bin dort' (I'm there)! I was really looking forward to tackling German since it has the reputation of being extremely difficult to learn. I'm excited to learn with Lingoda's method, which breaks things down and focuses on real-life language and cultural context too," says Franco. "After all, I learn languages for the people they allow me to connect with. With more German skills comes more opportunities to speak to locals in Berlin, which is really everyone's summer travel goal - to be able to speak the language of the country that you are traveling to, so you can make genuine connections."

The Berlin-based online language school is equally thrilled to be partnering with Franco.

"She's a language learning enthusiast and so passionate about every new language that she is taking on," says Mike Shangkuan, Executive Advisor at Lingoda. "With her community of language learners, we are grateful to know that Jo gives honest feedback on our classes. And we are certain that with Jo's natural way of picking up a new language quickly, she will be able to experience Berlin like a local."

If you are interested in interviewing Jo Franco to learn more about her partnership with Lingoda, please send an email to press@lingoda.com.

Lingoda is one of the top online language schools. Founded in Berlin, Germany, in 2013, we provide convenient and accessible online language courses in German, English, Business English, French and Spanish to over 100,000 students worldwide. With almost 550,000 classes available per year and accessible 24/7, our mission is to build bridges around the world through language learning.

Take the Lingoda Language Sprint™ to Prep for Summer Travel
Students learn how to speak a new language confidently in just two months before their summer vacation and can win up to 100% cashback
Lingoda - May 12, 2022