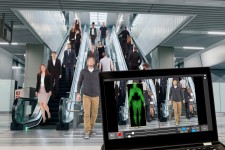 The Thruvision TAC addresses the growing need to protect public transit, surface transit and public venues from the threat of personnel-borne improvised explosive devices (PB-IEDs), explosives, weapons and other threats. A 2015 MIT study[1] concluded that terrorists have shifted to attacking surface transit using these types of concealed threats. Unlike metal detectors, which cannot detect non-metallic threats such as plastic explosives, the Thruvision TAC can detect any concealed objects at distances up to 25 feet. Unlike airport body scanners, it does not reveal anatomical details and it emits no energy or radiation.

“As recent terrorist attacks indicate, public transit agencies such as LA Metro need to be able to quickly, safely and effectively identify potential threats in crowded venues,” commented Kevin Gramer, Vice President of Thruvision Americas. “The Thruvision TAC provides immediate identification of concealed items. Due to its compact design and mobile configuration, LA Metro will be able to deploy it rapidly based on changing security requirements.”

In a statement issued by the US Transportation Security Administration, which performed extensive testing of Thruvision’s technology, TSA Administrator David Pekoske hailed the deployment of Thruvision’s system to improve transit security:

“TSA applauds the leadership of L.A. Metro for its proactive efforts to evaluate, procure and use state-of-the-art technology designed to detect potential threats to the transit system,” said TSA Administrator Pekoske. “TSA is pleased to have been a partner during the evaluation and testing process, which ultimately led to the purchase of a recommended system to help detect and deter potential acts of terrorism while keeping the traveling public safe.”

“Metro has been an industry leader in testing new technologies to meet evolving threats to our public transportation infrastructure. This new technology will augment our already aggressive safety and security measures and help us proactively deter potential attacks to our system.”

Originally developed by government research labs in the UK and US, the Thruvision system uses passive terahertz technology that detects the natural energy emitted by a person’s body and can determine if a concealed object is blocking this energy.