Meet a Scientologist Steps Out in Style With Chie Mihara 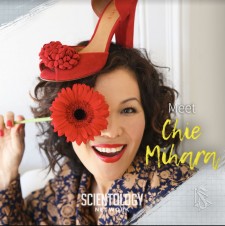 Chie Mihara built her popular global shoe brand with a simple philosophy—take the seriousness out of fashion. Drawing on her multicultural background and multidisciplined arts education, her shoe designs are fresh, funky and feminine—and sold in leading high-end boutiques and luxury department stores around the world.

Born and raised in Brazil to Japanese parents, Chie Mihara traces her interest in art back to childhood and the character sketches she did, inspired by Japanese manga magazines her father brought home to her. As a teen, her focus shifted to fashion, coinciding with a wave of Japanese designers, such as Yohji Yamamoto and Issey Miyake, making an impact on the world fashion scene. At her father’s insistence, Chie moved to Japan to study fashion, later getting her first job with well-known designer Junko Koshino. Wanting to broaden her artistic development, Chie moved to New York, where she studied fashion and sculpture. Combining the two disciplines, she started designing women’s shoes with prestigious shoe designers in the U.S. and France. Always believing she had a personal story to tell as an artist, she eventually struck out on her own, moving to the land known for producing some of the highest quality shoes in the world—Spain. There, she fashioned high-quality shoes with a fun, funky and fresh aesthetic and grew her company into one of the world’s most recognized brands in women’s footwear.

The Scientology Network debuted March 12, 2018. Since launching, the Scientology Network has been viewed in 240 countries and territories in 17 languages. Satisfying the curiosity of people about Scientology, the network takes viewers across six continents, spotlighting the everyday lives of Scientologists, showing the Church as a global organization and presenting its social betterment programs that have touched the lives of millions worldwide. The network also showcases documentaries by independent filmmakers who represent a cross-section of cultures and faiths but share a common purpose of uplifting communities.

Broadcast from Scientology Media Productions, the Church’s global media center in Los Angeles, the Scientology Network can be streamed at Scientology.tv and is available through satellite television on DIRECTV Channel 320, mobile apps and via the Roku, Amazon Fire and Apple TV platforms.