Michelle Wodynski, Prominent Attorney and Philanthropist, Featured in the Top 50 Women of 2019 Magazine

The Top 100 Magazine announced today that prominent attorney and philanthropist Michelle Wodynski, Esq. will be featured in the Top 50 Women of 2019 Magazine.

WESTBURY, N.Y., October 29, 2019 (Newswire.com) - Ms. Wodynski is founder of MDS Premier PC, a law firm in the Los Angeles area with strategic partnerships across the United States and 32 countries worldwide.

As a seasoned entertainment, intellectual property, and business attorney, she has represented high-profile famous clients all over the world (i.e., Starbucks, Victoria’s Secret, Absolut Vodka, Nike, Cameron Diaz and Shaquille O’Neal to name a few).  Many of her cases have ranged from $1-300 million and her clients have been known to refer to her as “the secret weapon.”

The media-savvy and telegenic attorney has been a legal expert on Entertainment Tonight in Dubai, and appeared on the Emmy-nominated Netflix show “Nailed-It.”  She is also the host and creator of a comedic legal series called Pop Legal TV.

Ms. Wodynski is a born leader and philanthropist.  She has won many pro-bono awards and giving back has been a part of her career from the start.  Examples: Founder of the Wodynski Heart Foundation, Board Member for ReelAngels, and Ambassador for the African Community and Conservation Foundation.

Ms. Wodynski is a true changemaker and in her words, “I feel it’s important to pay it forward once you reach a certain level of success and to be the change you wish to see.  I am committed to making the world a better place for my daughter, which is why I champion so many organizations working to improve education and equal opportunities for young women and girls worldwide.”

About The Top 100 Magazine

The Top 100 Magazine is a publisher with a worldwide presence in over 90 countries. ﻿In addition to distributing over 400K printed/digital magazines annually, we have become successful influencers in social media, branding, and digital marketing. 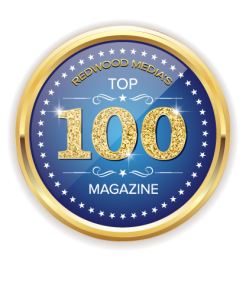