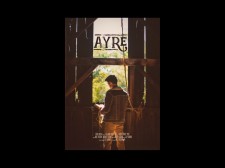 Salt Lake City, Utah, June 16, 2017 (Newswire.com) - Cedar Breaks © Band is releasing the song “Ayre” this month along with their first music video of 2017. The Band recently crossed their genre line with the song “Ayre” and won in the “Best Rock” category at the 2016 Utah Music Awards. Though the basic trend of Cedar Break’s © music is labeled “New Age Folk,” the band is very diverse and loose with that designation, presenting songs with rock, blues, bluegrass, and even gospel leanings. They combine strong and interesting harmonies with diverse settings of instrumentation including Classical guitar, rock guitar, violin, piano, banjo, and drums.

The Band believes that the message of their songs and media, which includes music, films, music videos and books has the power to help ask the right questions and that answers can come to those that will take the time to listen.

The Band gets asked a lot about the meaning of the name “Cedar Breaks ©.” So “Ayre” was written for that reason and as a namesake piece. It’s a bit of a “look up from the device and get back to nature and the Spirit” song. A band member commented, “We love cell phones and devices but there is a whole world out there waiting to communicate with us, if we will just listen.” The Band loves to showcase the beauty of their state in their films and they are excited to demonstrate the strength of Utah’s diverse culture built around the blessings of freedom. When asked about the song’s meaning, one band member replied, “When you stand at the cliffs of Cedar Breaks ©, looking up at night or down in the day, you can see millions of years in the past as well as the endless possibilities in either direction. You can look across the vast waves of green cedars that are now, and realize in the midst of all that time that you have choices to make that will affect generations. You realize that you must step forward with meaning and intent.”

All members of Cedar Breaks © have individual music and performing careers, and they come together as Cedar Breaks © Band as a way to present top quality media that they hope will make a difference in the lives of others with the use of stories and themes about faith, family and heritage.

The interesting combinations of style, age, and different musical backgrounds of the band members has produced a sound that has been noted as being “fresh, distinctively different and timeless.”

What's really unique is the ways that they have found to spread their message. At this time they are not a touring band because of a commitment to their young families. In the five years that they have been together, they count 10 babies. You can see family all throughout their films as well as many times on the film sets or in the recording studio. They are committed to the message that they send out and they are quick to point out that it costs a lot less to have family members part of the production.

Cedar Breaks © has done a lot of programs and concerts over the last five years — usually with just one or two of the band members at a time, but rarely with all 5 members together other than to practice, work in the recording studio, or presented on the screen. The last year found their presentations and concerts in Iowa, Wyoming, and Utah. They have been able to combine their message with live songs from one or more of the band members and then introduce the band with some of their videos.

They also have a talented naturalist photographer that they work with, Norm Bosworth from BCI video; and they have a dancer, BYU student Chanel Kostich.

There is also an interesting inter-faith part of their story. The Band’s music and videos have also been played at many Christian music and film festivals across the country and even winning some. One band members pointed out, “We have so much is common and societal goals with other faiths, so we want to find ways to celebrate these and to work together. Though the band presents its media as non-denominational, they bring the spirit of who they are to the world. Cedar Breaks © believes that their message can transcend the different faith traditions.”

The mission statement of the band is:

"Do not trust your good intentions
For they are never enough
Trust your willingness to act.
Even in the face of challenges.
Consider all those that have gone before.
Know the “You” that is now.
For today we change the world.
And leave behind a gift, redeemable.
To those dearest to our hearts."

Some of the band's most popular songs and music videos that apply to Utah include:

Light (used at the 2002 Winter Games; filmed in the Wasatch Mountains)

Always Mine (filmed at the Salt Flats)

Empath Media LLC is an award winning group of musicians, writers and photographers that build media relating to Faith, Family , and Heritage.