PASSalert Is a New Fire Safety Device That Can Save Your Life.

PASSalert Is a New Fire Safety Device That Can Save Your Life. In an emergency, every second counts. PASSalert is an ingenious and revolutionary device that has built in Wi-Fi capabilities and walks a user through a proper and effective PASS technique. The PASSalert device can clarify what to do in an emergency when users may be scared or forgetful. PASSalert can also instruct someone unfamiliar with a fire extinguisher during an emergency that can give your family peace of mind. 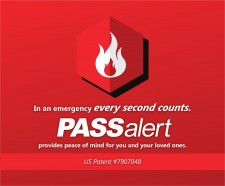 Chicago, IL, July 10, 2016 (Newswire.com) - With a website released just last month at www.PASSalert.org, the company is quickly gaining attention on social media sites like www.facebook.com and www.yahoo.com. PASSalert is a new safety device that is used with a fire extinguisher. PASSalert has designed two separate device types. One is a factory-installed option for Consumer ready sales and installation. The other is an attachable device that you can buy and attach to an existing fire extinguisher. It was created, tested, and approved by firefighters and is very simple to use, being in a state of panic when there is a fire near. Target markets for this device would be residential, office, public buildings, vehicles, warehouses, and healthcare facilities. The target market outlets are endless for PASSalert. "This needs to be in every location that currently has a fire extinguisher. This could be huge in the amount of people it saves," says Captain John Davis, a Fire Prevention Officer. Plans are being discussed on the direction the company should be headed and rumors are circulating regarding addition team members being added. Speculation surrounds the funding campaign placed on hold earlier this month, sources state www.kickstarter.com and www.gofundme.com might be used in efforts to distribute an initial market ready prototype which will be finished later this month. The PASSalert device is registered under a public US patent number 7907048. PASSalert has provided technical data on their website as well as downloadable brochures for the device. To learn more about the company, expansion plans, funding, or to book an interview, contact CEO Jeffery Werner at (815) 212-5049 or email, jwerner@passalert.org, or visit the website at www.PASSalert.org.

PASSalert is a fire extinguisher accessory device that has built in wifi capabilities and walks a user through a proper and effective PASS technique. The PASSalert device can clarify what to do in an emergency when users may be scared or forgetful.