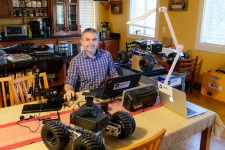 MESA, Ariz., March 18, 2020 (Newswire.com) - Swarm Technology announced today the issuance, by the US Patent Office, of a patent that covers collaborative intelligence within IoT and robotic devices.

"This latest patent makes claims in connection with our technology that allows seamless plug-and-play scalability, collaboration and interoperability within an array of autonomous devices; the architecture is truly heterogeneous, hence it is equally applicable to robotic devices," said Alfonso Iniguez, Founder of Swarm Technology. "This is the third issued-patent in our portfolio, which adds confirmation to Swarm Technology's leadership in collaborative intelligence," he said.

As described in the patent — U.S. Patent No. 10,592,275 — co-processors are capable of acting proactively; that is, they may interact with task pools independently of the controllers that populate the desired objectives into those task pools. "The decoupling of co-processors from mission controllers, enables dynamic aggregation, and dynamic configuration — as we have demonstrated in our prototypes — the decoupling is especially important when the task pool is cloud-based and the mission controller is a portable device," said Mr. Iniguez.

Once the architecture is understood, the scope of utilization contemplated by the patent portfolio is vast, in addition to intent-based device automation, applications also include autonomous coordination of large fleets of unmanned ground vehicles (UGVs), and unmanned aerial vehicles (UAVs).