Things to Do in Palm Bay This Week - Hellzapoppin Sideshow

The world-famous sideshow is back with the Face Your Fears tour. First stop? Palm Bay. 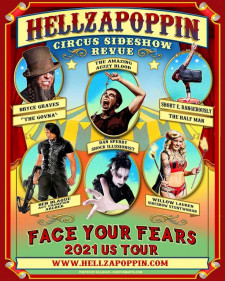 PALM BAY, Fla., February 23, 2021 (Newswire.com) - ​Hellzapoppin, the world's greatest international touring rock-n-roll circus sideshow thrill-show extravaganza, is set to take the stage at the Space Coast Harley Davidson in Palm Bay, Florida. The theatrical circus thrill-show will be performing some of the deadliest stunts in live entertainment on Feb. 26. The show is the first stop on the group's new "Face Your Fears" tour.

In the past three years, Hellzapoppin has performed over 400 shows in 16 different countries. The group performed with bands such as Avatar, In This Moment, John 5, and Mushroomhead in front of millions of people at some of the world's biggest and most famous festivals, such as Wacken Festival in Germany, Riot Fest in Chicago, and Alcatraz Festival in Belgium.

"After a long wait, the time has finally come," said Hellzapoppin's ringleader and producer, Bryce "The Govna" Graves.

"We have been waiting for months to get back on the road and return to touring. More importantly, we are thrilled to be able to incite laughter and wonder from our audiences. Our shows give us the chance to connect with people and bring them into our world as we share our stories with them. By doing so, we are able to temporarily uproot them from their harshest realities, fears, and anxieties, and replace those feelings with shock, awe, and excitement. The best is yet to come - we'll make sure of it."

The performers have quite a resume to go with their acts - they have been been featured on a wide variety of major television shows, including but not limited to Fool US with Penn and Teller, Masters of Illusions, Germany's Das Supertalent, World Magic Awards, AMC's Freakshow, America's Got Talent, Britain's Got Talent, Wild Card Show, I Can Do That, and the best-selling magic show in Broadway history, The Illusionists!

To learn more about Hellzapoppin's passion-fueled performances and for tickets to their "Face Your Fears" tour, please visit https://hellzapoppin.com.

HELLZAPOPPIN is the world's largest touring rock-n-roll circus freak show, thrill show, sideshow & stunt show extravaganza! We're mavericks, trail blazers, rebels, rule breakers, outlaws...true uninhibited artists. We deliver our message through sideshow and fuel our art through passion. Named after the most successful Broadway musical and movie from the late 30s and 40s, Hellzapoppin is a world renowned theatrical circus thrill-show where some of the deadliest stunts in live entertainment are performed to loud crowd-pleasing musical tracks.

Drafted for a previous release.

A Real, Live, Traveling Sideshow is Up Against the Biggest Challenge of Their Lives - Facing Their Fears!
The international tour features some of the deadliest stunts in live entertainment.
Hellzapoppin - Feb 8, 2021