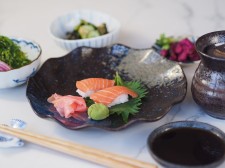 SAN FRANCISCO, September 16, 2020 (Newswire.com) - ​​​​Cellular agriculture startup Wildtype has unveiled its latest cell-based salmon. This version is “sushi-grade” and crafted with the sushi industry’s favorite raw salmon applications in mind. Like Wildtype’s earlier batches, this salmon sushi is made with genuine coho salmon cells, grown in a brewery-like system.

The sushi industry is asking for a new source of seafood with highly sustainable and transparent supply chains. “We’re creating sushi with cells from one of the world’s favorite fish, without needing to take fish from the ocean,” says Aryé Elfenbein, MD, Ph.D., Wildtype’s Chief Scientist. “Although farmed salmon now comprises two-thirds of the salmon we consume, wild fish stocks are still declining. We believe the 21st century will require new seafood options that are better for us and the planet. Wildtype’s cell-based salmon sushi is just the beginning,” adds Justin Kolbeck, Wildtype’s CEO. ​

Wildtype plans to sell its salmon to sushi restaurants and eventually retail stores around the country, although COVID-19 has required food companies to be agile with their strategic plans.

About Wildtype: Wildtype is on a mission to create the cleanest, most sustainable fish on the planet, starting with salmon. The company is pioneering cellular agriculture to protect wild salmon and the oceans, and help solve global food insecurity. While demand for seafood is at an all-time high, wild fish stocks continue to plummet and salmon farms face warming coastal waters due to climate change. Wildtype will provide consumers with a new third option for seafood that provides the same nutritional benefits as the most pristine wild-caught fish without contaminants such as mercury, microplastics, antibiotics or pesticides. Wildtype is based in San Francisco, California. It raised a $3.5 million seed round in 2018 and a $12.5 million Series A in 2019. Investors include Spark Capital, Charles River Ventures, Root Ventures, Alexis Ohanian, and Kyle Vogt, among others.